PING (Packet Internet Groper) is a program used to test whether a particular network host is online by sending an ICMP (Internet control message protocol) echo request and waiting for a response. It is used for troubleshooting connectivity between network devices such as servers, routers, workstations and printers. It is one of the most commonly used tools used to troubleshoot network connectivity between devices.

You can ping a host from a command prompt simply by typing ping followed by the IP address. For example type ping 192.168.0.1 to see if the host with the 192.168.0.1 IP address is reachable. It also works with hostnames on the same network so if you have a server called WebServer you can type in ping WebServer to check for connectivity. You can also ping a website by typing ping www.microsoft.com to check its availability. For Windows computers you will need to allow ICMP packets through the firewall in order to be able to ping those computers.

To use the PING utility simply open a command prompt from your Start menu or type in cmd from your run command box or your search box.

When a PING is successful you get a reply back from the host showing its IP address and other information such as the time it took for the reply to go through. 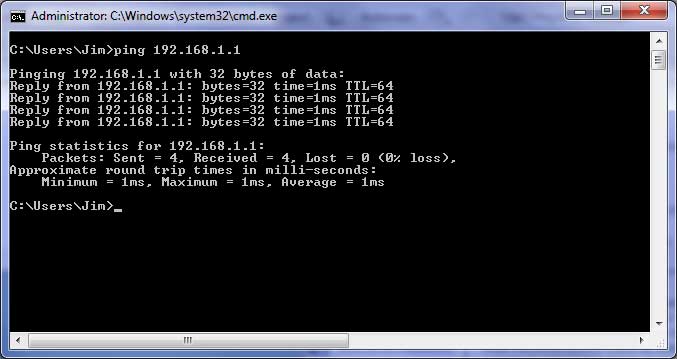 When a ping response is not successful you can get a variety of error replies. Here are the main error messages and what they mean.

TTL Expired in Transit
The TTL value determines the maximum amount of time an IP packet may live in the network without reaching its destination. It is effectively a bound on the number of routers an IP packet may pass through before being discarded. This message indicates that the TTL expired in transit. Number of required hops exceeds TTL. Increase TTL by using the ping -i switch.

Destination Host Unreachable
The host that you are trying to ping is down or is not operating on the network. A local or remote route does not exist for destination host. Modify the local route table or notify the router administrator.

Request Timed Out
The ping command timed out because there was no reply from the host. No Echo Reply messages were received due to network traffic, failure of the ARP request packet filtering, or router error. Increase the wait time using the ping -w switch.

Unknown Host
The IP Address or the Host Name does not exist in the network or the destination host name cannot be resolved. Verify name and availability of DNS servers.