Skip to content
Home Networking Canada, Is It Safe to Surf the Internet without a VPN?

Do you feel safe surfing the Internet?

It’s been said countless times already, but the Internet has experienced a ton of growth in the last 20 years and is bigger than it has ever been. However, this growth has not come without a few drawbacks. Take the people in Canada for instance. Many of them are surfing the web feeling concerned that their every move is being monitored by their own government.

Canada is part of the infamous Five Eyes Intelligence Sharing Agreement. This alliance goes all the way back the Second World War and was initially known as the UKUSA (United Kingdom-United States of America) Agreement. The partnership was formed with the purpose of both countries sharing intelligence with one another. .

With that said it is easy to see and understand why Canadians tread lightly whenever they go online. More data is being handed online by Canadians than ever before. Even doing normal everyday things like checking your social media profile or performing a search on Google means you’re already sharing your data online – albeit unwillingly.

Despite all the mass surveillance in Canada, there is a way to bypass all of this monitoring. Using a VPN is the most fundamental solution as it helps cover up a user’s tracks by hiding their IP address. Private browsers (i.e., Incognito Mode with Google Chrome) also help by not saving a user’s browsing history and site cookies, but it cannot stop third parties from knowing about your browsing activity.

Simply put, using a VPN is perhaps the best way to ensure that one’s privacy will be kept secured online in Canada. Many Canadians use VPNs to access the US version of Netflix as it has more selections of shows and films than its Canadian counterpart.

Several companies and individuals and companies use VPNs to secure their communications and internal data. VPNs work by encrypting a computer’s internet connection to prevent third parties from collecting your data.

They are also commonly used to protect users from cybercriminals, especially when accessing a public Wi-Fi hotspot where hackers tend to wait for victims. While there are free VPN proxy servers online, they come with plenty of limitations. For one thing, their list of servers is small compared to the ones offered by subscription services. Free VPNs also tend to have slower browsing speeds and their security may not even be 100% guaranteed.

Despite being under the Five Eyes umbrella, using VPNs is 100% legal in Canada. Setting up a private network with NordVPN Canada servers will not land you in any hot water with the law. As a matter of fact, a good number of government agencies in Canada use VPNs to help them protect their important data from would-be hackers. Technically speaking, there is no law that prohibits people from using this service whenever they go online. 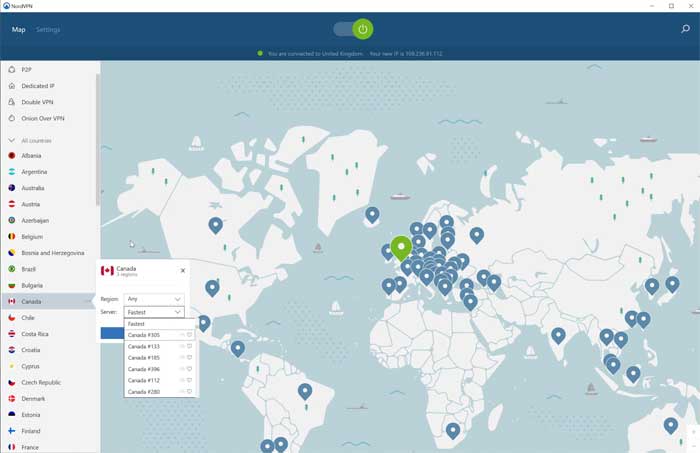 However, there are binding laws in some countries that require some VPN providers to their customer’s data whenever a government agency orders them to. So, it is important to go for a VPN service that doesn’t keep logs of the user’s activity.

The cybersecurity laws in Canada are strict, and this is usually upheld to prevent potential threats like cybercrime and terrorism. If you were to look at things from the government’s perspective, you really can’t blame them for being strict with their internet laws. However, as a Canadian, it’s tough whenever surfing the internet feels like a chore because of the government constantly monitoring your activities.

So, is it safe to browse the internet in Canada without using a VPN? It depends on what you’re doing whenever you go online. Most people who browse the internet to read up on articles or check their Facebook and Twitter accounts really don’t have much to worry about. However, those who want to get access to the US version of Netflix, watch blacked out sports games, and even torrent some files off the internet will definitely need to use a VPN.

As one of the members of the Five Eyes Alliance, Canada can instill a sense of fear into anyone who goes online, so it’s a good thing that there are VPNs available to help users get passed this.