As Microsoft comes out with new versions of Windows and you replace your computer or upgrade your version of Windows you will most likely still need to run your older software. This can be a problem depending how old your software is and who makes it. Most people don’t want to upgrade all their software just because they upgraded Windows.

If you have software that doesn’t run properly in Windows 7, 8 or so on you have the option to run it in a different compatibility mode which runs the program as if you had a different version of Windows. For example you may notice if you use certain versions of Windows Live Messenger and you click the X it is supposed to minimize it to the system tray by the clock. With Windows 7 it minimizes it to the taskbar instead.

If you change the mode in which Windows Live Messenger runs to Windows Vista then this will fix the problem. To do so you need to find the executable for the program. In this case it is located in C:Program Files (x86)Windows LiveMessenger and the executable file is called msnmsgr.exe. If you are running the 32 bit version of Windows then you won’t have the (x86) in the path.

Close the program you want to change and right click the executable and choose Properties. Then on the Compatibility tab check the box that says Run this program in compatibility mode for: and choose Windows Vista (Service Pack 2) and then click ok. Now it will run as if you are running it in Windows Vista. Or if that doesn’t work you can try some of the other setting such as Windows 7 or even Windows XP. 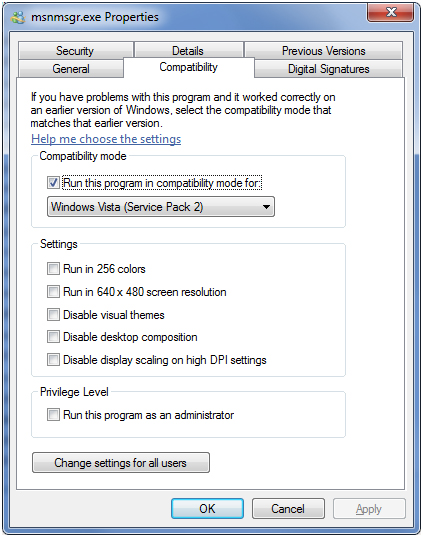