Anyone born before 2003 will have at some stage used a CRT monitor, or a cathode ray tube monitor. The name itself quite aptly captures the incredible bulky and awkward devices that were used to display computers through the greater part of the noughties and nineties. They are better recognized nowadays as things you might occasionally see in a skip out of the back of an office building or in your aging uncle’s man cave. They’re not, by any means, cutting edge. However, in recent years, a conversation has started back up about the potential merits that these cumbersome screens might offer and the advantage that they may even have over their modern-day counterparts, believe it or not. But there are two sides to every argument. So, let’s take a look at the reality of the CRT monitor and what it could possibly offer us today.

Resolution Benefits
The CRT monitor has a surprising advantage over many modern screens in how they handle resolution. "Modern HD monitors have a native resolution that, if its demands aren’t met by the image it is display, means that the image itself gets stretched and its quality affected to get up to scratch”, explains Julia Ling, tech writer at 1Day2Write and NextCoursework. The old CRT monitors don’t have a native resolution inherent to their screen because instead of physical pixels being used, the image is painted onto the inside of the screen with electron beams. The end result is that having a low-resolution image and putting it up on a CRT screen will always look smooth and appealing in a way that it won’t on a modern monitor. 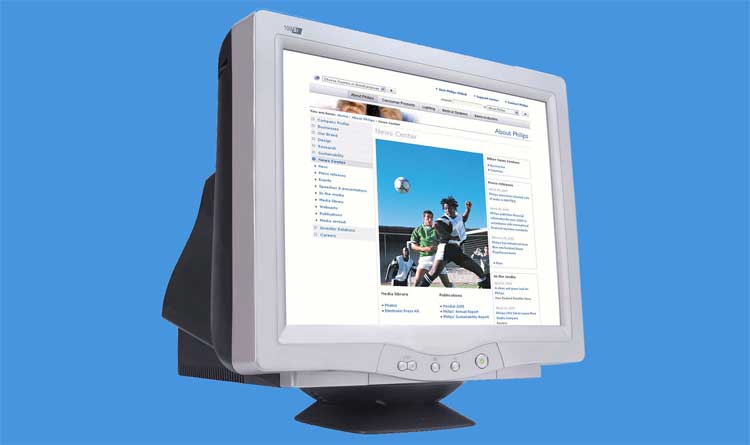 The benefit of this, is that there are times here you might want to be operating in resolutions which are lower than HD. Examples of this are if you want to boost your FPS (frames per second) in a video game, or if you are handling a difficult video edit, with large, cumbersome files. Things still looking good at a lower resolution allows you to give your system a bit of a break when it needs it, rather than forcing it to power through to meet the demands of your fancy new monitor.

Display Methods
Have you ever watched something on an LCD flat screen and thought that it looked a little weird? Like it’s all too smooth? This uncanny effect is to do with the display method that HD screens use. "An advanced flat screen will have a frame by frame display method where each frame is frozen in place for the duration of its length and seamlessly replace when it needs to be. Though this sounds good, it clashes with the human brain’s way of perceiving movement and gives things a very unusual feel, especially when any lengths, like motion smoothing and intermittent black frames, are used to try and rectify the situation”, says Peter Bays, journalist at BritStudent and WriteMyx. A CRT monitor lets each frame naturally extinguish itself as the phosphors start dying soon after being painted on the screen. The overall effect is far more pleasing motion display

True Black
The black that screens display us, particularly modern screens, is nowhere near true black or even an approximation of it. When the screen is meant to be black the pixels responsible will switch off to generate that, but unfortunately, they don’t block light that’s coming in through the behind. This leaves ‘black’ looking more like grey and a dissatisfying experience overall. CRT screens use the painting on method to eliminate this problem and to display a rich and deep true black almost perfectly. In the future, once the technology becomes more affordable, this won’t be a problem for LED screens. But, at present, it’s another area in which the CRT screens are winning the battle.

Conclusion
The big drawback with CRT screens is that they are impossibly clunky and a pain to move. They’re also electricity draining, bad for viewing widescreen content and not good for real productivity. So, on balance they’re not worth it. But, if you have a niche interest in high quality displays for gaming and things like it, it might be worth taking a look.

Alicia Kidwell is a recruiter at PhdKingdom and AcademicBrits and supports clients in a variety of industries, operating in recruitment, including sourcing and screening candidates, and developing diverse recruitment techniques. She has over 7 years of recruiting and human resources experience. Alicia is passionate about sharing her knowledge on a whole variety of subjects, from tech to music, and, in her spare time, writes for blogs and online magazines like Assignment Help, an educational service.