In order to view output from your computer on your monitor you need to connect the 2 with some type of cable since wireless monitors are not very common yet and kind of still in the works. When it comes to connection and cable types they are all not the same in regards to image quality. But if your computer only has a certain type then you are stuck with whatever technology that is unless you want to change out your video card for something with a newer connection.

For a long time, VGA (Video Graphics Array) was your only video option and it has been out since 1987 so that tells you how much we were due for an update! Even though VGA is an old standard, it is still widely used today and some new computers and monitors still come with VGA ports although you see that less and less now.

After VGA was starting to show its age there was another type of video cable called DVI (Digital Visual Interface) was introduced in 1999 and provided a digital signal rather than the analog signal that VGA uses. Shortly after that in 2002, version 1 of the HDMI (High-Definition Multimedia Interface) standard was released. Then shorty after that in 2006 the first version of the DisplayPort interface was released. Now that we have all our dates in order let’s talk about each type of connection. 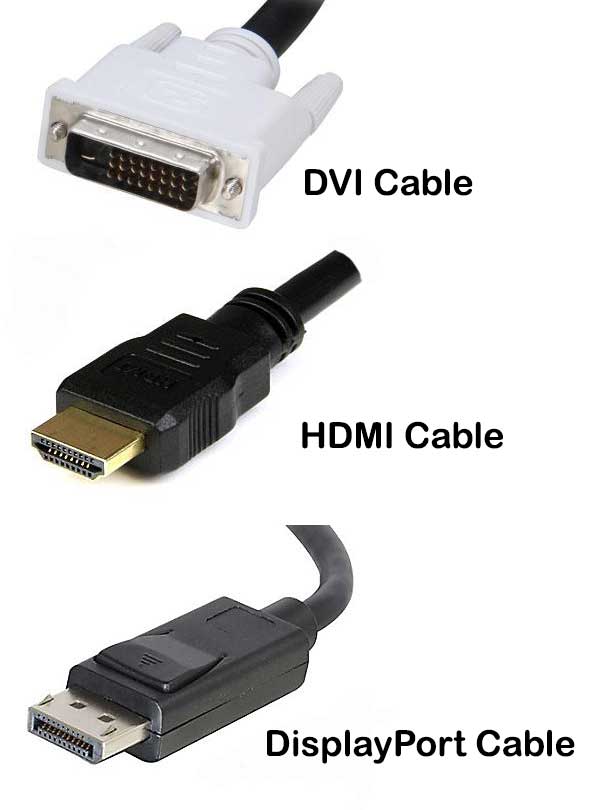 DVI
DVI was developed by the Digital Display Working Group and uses a uncompressed digital video unless you are using DVI-A which uses an analog signal. The other types are DVI-D (digital) and DVI-I (digital and analog). The digital versions of DVI come in either dual link or single link and you can tell the difference by the number of pins on the connector with dual link having more. Single link DVI supports resolutions up to 1920 × 1200 and dual link supports resolutions up to 2560 × 1600. DVI is compatible with VGA and HDMI and you can get a cable that converts the connection from one type to the other. DVI is mostly used for computer video connections but some TVs have DVI ports on them as well and you can actually connect your computer to your TV to use it as a display.

HDMI
HDMI also transmits uncompressed digital video like DVI but can also transmit audio signals as well. There have been several updates to the HDMI standard through the years improving its performance and capabilities. There are 5 types of HDMI connectors labeled type A through type E with each one adding new features and capabilities. An HDMI cable is composed of four shielded twisted pairs of wires. These cables can also be used with LED and LCD TVs and can transmit a 1080p signal to the TV with newer cables supporting 4k and even 10k TVs. Current resolution support for HDMI on your computer is 2560×1600. The newer Ultra High Speed HDMI cable supports up to 48G in bandwidth.

DisplayPort
The most recent cable type of the bunch was designed to specifically connect devices to displays such as computer monitors. DisplayPort is compatible with HDMI and DVI and you can get conversion cables just like with the other video types. Just like HDMI, DisplayPort can carryaudio signals but can also transmit USB data. If you like high resolution then how does 5120 x 2880 at 60Hz sound to you? Not too many computers or TVs come with DisplayPort connections at the moment but since it appears to offer better performance than HDMI we think it will eventually start to gain in popularity.

When choosing your next computer or TV you should see what connection types they offer and then factor that into your decision on which model you are going to choose. For the most part you will be dealing with either HDMI or DisplayPort and either one is going to be just fine for the average user who probably won’t notice the difference.