When it comes to hard drives for your computer, you have a few choices as to what type of drive to use. Some offer better performance than others but that usually comes with a higher price tag. For example SCSI hard drives offer very high performance speed and are good for RAID array setups but they can be very expensive for a drive that is not that large in size.

New computers are starting to use Serial ATA (SATA) hard drives instead of IDE because they offer faster speeds at around the same price. But what is the difference between SATA and IDE drives? I’m glad you asked!

Interface
Serial ATA drives use a serial link and a single cable with a minimum of four wires to create a point-to-point connection between devices. Data transfer rates for Serial ATA start at 150 MBps and newer versions are much faster. The thinner serial cables allow more efficient airflow inside the case and also allow for smaller case designs.

IDE (Integrated Drive Electronics) drives, also called ATA are based on the IBM PC Industry Standard Architecture (ISA) and are used in many PCs today. They utilize a controller that is built into the motherboard. They connect to the controller and other IDE devices using a 40 or 80 conductor ribbon cable depending on the age of the drive. 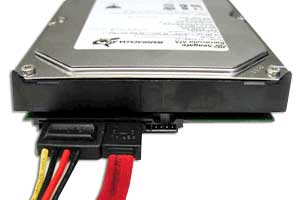 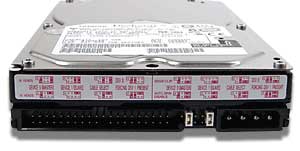 Performance
Generally SATA drives are faster than IDE but you wont see much of a difference until you get into the higher RPM (10,000) drives or RAID setups if you are using the older generation SATA drives. Generally IDE drives max out at 133MBps while SATA is capable of 150MBps for the older drives and 3Gbps and 6Gbps for the newer SATA 3 drives.

Installation
Installing a SATA drive is similar to installing an IDE drive. The cable that connects to the motherboard is different and the power connection can be the same 4 pin type as an IDE drive or the newer L shaped power connector. One thing to watch for if you are a Windows user is that you may need to install software off the manufacturer’s disk to get Windows to recognize the drive.

Price
For common size SATA drives such as 250 gigabytes the prices are not much more than a similar sized IDE drive. When you get into the higher RPM drives then the prices start to go up.