Skip to content
Home Hardware How a Laser Printer Works

Almost everyone who has a computer has printed or has had the need to print something at some time whether it’s been a document or picture etc. When it comes to printers, not all printers are the same. There are different types of printers with different functions and some work better than others for certain types of print jobs. Knowing what type of printer you need will allow your print jobs to look their best.

A laser printer differs from other types of printer such as dot matrix and ink jet in the way that it doesn’t directly put ink on the paper. It uses a laser along with electricity to fuse the image to the paper with toner.

First, the computer sends data to the printer which is stored in the printer’s memory.

Next, if the print job needs any fonts that the printer does not have are sent to the printer and stored in its memory.

The main concept in use with a laser printer is static electricity.

The core component of this system is the photoreceptor, which is a revolving cylinder shaped drum. This drum assembly is made of photoconductive material that is discharged by light photons. Before printing occurs, the drum must be cleaned to remove any traces of previous pages. The drum is given a positive charge by the corona wire, which is a wire with an electrical current running through it.

As the drum revolves, the printer shoots a small laser beam across the surface to discharge certain points to draw the letters and images to be printed as a pattern of electrical charges. The data in the printer’s memory is written to the drum using this laser instead of ink or toner and this process changes the electrical charge in those spots. 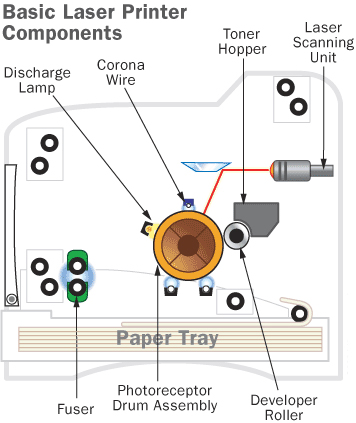 After the pattern is made, the printer coats the drum with positively charged black powder called toner. As the paper is being drawn in to the printer, the toner is applied to the drum. Since it has a positive charge, the toner clings to the negatively discharged areas of the drum, but not to the positively charged areas. At this point, the image is on the drum, along with the toner.

Finally, the printer passes the paper through the fuser, which is a pair of heated rollers. When the paper passes through these rollers, the loose toner powder melts and fuses with the fibers in the paper making it stick to the paper.

The last step of the fusing process is the pressure roller. This is a rubber roller that presses against the fuser roller and the paper feeds between it and the fuser roller. After putting the toner on the paper, the drum surface passes the discharge lamp. This light exposes the entire photoreceptor surface, erasing the original image and makes it ready for the next print job.