Almost everyone who has a computer has the need to print a document or picture at some time. But if you have multiple computers and only one printer on your network then it can be more difficult to get your print job to the printer if the printer is not connected to your computer. One way of doing this is sharing the printer on the computer that it’s attached to but then that computer needs to be turned on at all times or else the other computers can’t access that printer.

If you have one printer and multiple computers that need to print to it then you can make your printer into a print server. A print server allows multiple users to share a printer from anywhere on the network without sharing the printer on your computer. This way you do not need to have the computer with the printer attached to it turned on for the other computers to use the printer.

You can buy one of these print servers for around $60 from manufactures such as Netgear and D-Link. These devices generally plug into your parallel or USB port on your printer. 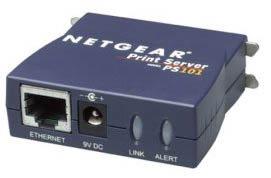 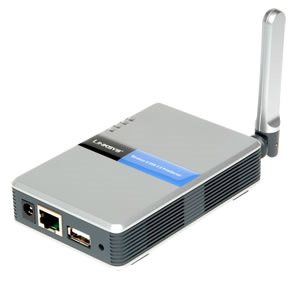 From there it converts it to an Ethernet interface out to your network. You assign an IP address to it or have your DHCP device assign one for you. You can usually give it a descriptive name to make it easier to find on the network. Once it’s installed you access the print server though a web based remote management console or other supplied software. Then you can setup the appropriate drivers on all of your other computers and then everyone can print to the printer as though they were directly connected.