Skip to content
Home Hardware How a Hard Drive Works

A hard drive is the component in your computer that stores information such as the computer’s operating system, programs and your files. They have been around for over 50 years. The very first computers did not use hard drives but instead ran off a floppy disk that you booted with. This is not practical with today’s computers since they have so many large files and would simply not fit on a floppy disk. Plus hard drives preserve data, programs and your operating system even while the computer is off.

Hard drives come in a varitey of sizes from several hundred gigabytes (GB) to several terabytes (TB). One TB is the same amount of storage as 1024 GBs.

There are a few exceptions to using a hard drive such as booting up operating systems such as Knoppix Linux and other operating systems that will run off a CD or USB flash drive. The only problem is once you turn off the computer there is no place for the data or any changes you have made to be stored. 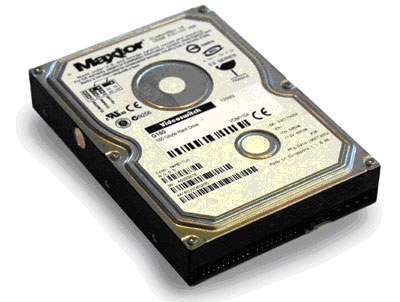 The main components of a hard drive consist of a motor, spindle, platters, read/write heads, actuator and electronics. The main circuit board is where the brains of a drive are found. This board contains embedded software that tells the hardware what to do and communicates with your computer. On many computers, the hard controller is built into the motherboard. This circuit board also contains the drive’s buffer which is a holding area of memory for data that’s waiting to be written or sent to your computer.

The drive is housed in a sealed aluminum box with the electronics attached to one side. This enclosure protects the drive internals from dust and condensation. The electronics control the read/write mechanism and the motor that spins the platters.

Hard drive platters spin at speeds ranging from 5,400 RPM to 15,000 RPM. 7,200 RPM is the average speed of most drives in use with home computers today. Each platter has a magnetic surface on which digital data is stored. Hard drives typically have one to four platters that are 3.5 inches in diameter and are coated on both sides with magnetically sensitive material, and stacked millimeters apart on a spindle.

The arm is the component that holds the read/write heads that are used to read data off of the platter. The arm is able to move the heads from the center to the edge of the drive. 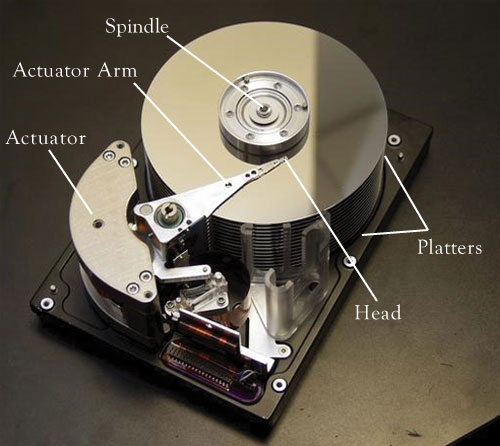 The arm and its movement mechanism are very fast. The armature moves the heads across the platters as they spin, allowing each head access to the entirety of the platter. Since the heads are so close to the disk surface, any contamination of the read/write heads or disk platters can lead to a head crash. The distance between the head and the platter is the thickness of a human hair. This is why its not a good idea to move your computer while it is running to avoid any sudden jolts that would make the head come in contact with the platter. In order to increase the amount of information the drive can store, most hard disks have multiple platters and read write heads. Data is stored on the surface of a platter in sectors and tracks.

A hard disk can be accessed over one of a number of interfaces. Some of these interfaces include IDE, Serial ATA, SCSI, FireWire and USB. Most home computers use the IDE interface with Serial ATA (SATA) starting to take the lead. Many business servers use SCSI because of its higher speed. SCSI is a much more expensive interface and not really practical for home use.

There are a couple of ways to measure the performance of a hard disk.

Traditional hard drives most likely will be replaced by flash hard drives in the near future which are much faster and don’t have any moving parts.