Hard drives are the component of your computer that stores your files as well as what your operating system is installed on. Without a hard drive you can’t store any information on a computer. Most computers use either IDE, SCSI or SATA hard drives to store data and the operating system. These drives have spinning platters inside them that are read by a head that hovers over the tops of the platters. They rotate at different speeds depending on the type of drive you have. Since they have moving parts they are prone to failure.

Flash hard drives, also know as Solid State Drive (SSD) is the latest technology for storing data on your computer and running your operating system. Flash memory offers fast access times, low weight and low power consumption. Plus the lack of moving parts makes it ideal for mobile environments such as laptops.

Solid state drives use NAND flash memory. This type of memory is typically used today in USB memory sticks, MP3 players and digital cameras. NAND flash drives are much more expensive than disk based drives for similar sizes. Eventually NAND may replace hard drives entirely in some notebooks because of the increasing amount of data the chips can hold.

Traditional hard drives store data on spinning platters that are accessed by a drive head that moves back and forth across the platter’s surface reading the data. By getting rid of the platters that a regular hard drive uses, you take the mechanical part of the drive away which takes away a point of failure while enabling lower disk access latencies and quieter operation. If data needs to be read from or written to a particular address, you don’t have to wait for the drive head and platter to move into position and the data can be accessed instantly.

By doing away with a traditional hard drive’s mechanical internals and platters and replacing them with memory chips allows a significant weight savings in the drive. Because it has no moving parts, a flash drive is considerably more shock resistant than traditional drives. 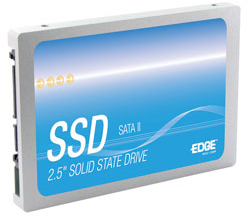 One of the major downfalls of solid state drives is that they are close to impossible to recover lost data from which is unacceptable for many users, especially those that don’t back up regularly. This is a real negative aspect for large companies as well.

As for the speed of flash drives it claimed that they are fast enough to load operating systems and can do so in about 2/3 of the time it would take with a regular hard drive. Flash drive manufacturer SanDisk says its flash drive can boot up Windows Vista in 35 seconds which is 28 seconds faster than the boot up time of a conventional drive.