Universal Serial Bus, or USB for short provides a single, standardized, easy to use way to connect devices to a computer. It uses a much higher data transfer rate than many common serial data formats. You can attach up to 127 individual devices to your computer using USB. USB can also supply enough power to smaller USB devices taking away the need to plug them into an external power source. This comes in handy for remote notebook useage.

Some common examples of USB devices include:

If the device you are installing is new to the computer, Windows will auto detect it and asks for the driver disk if needed. If the device has already been installed, the computer will start using the device right away. USB devices can be connected and disconnected at any time making them hot swappable. Typical USB connectors have an A connector on one side and a B connector on the other. You can have other types of connectors for different devices such as cameras and cell phones. 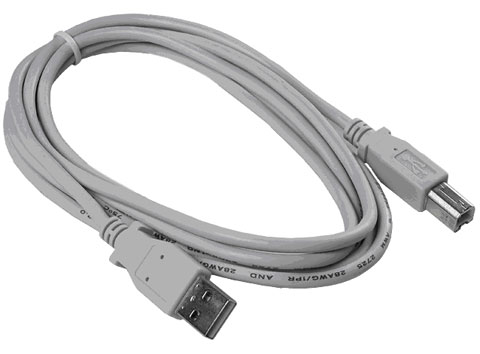 USB A and B connectors 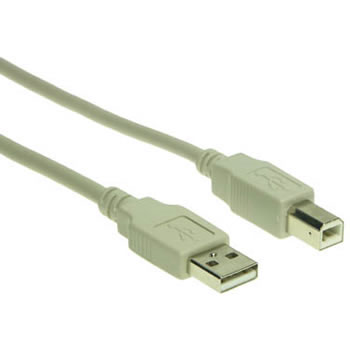 The PC host typically has connections for two or more external USB ports. Each of these connectors on the PC is actually a connection to a separate root hub inside the PC. A USB host controller in the PC is integrated into the chip set on newer systems and orchestrates the sending and receiving of data between the PC and an external device. When the host powers up, it queries all of the devices connected to the bus and assigns each one an address. The host keeps track of the total bandwidth that all of the isochronous and interrupt devices are requesting.

If you don’t have enough USB ports on your computer to accommodate all of your devices then you can buy a USB hub. Hubs can be powered or unpowered. Hubs can be part of the device such as a keyboard or monitor with USB connections on it. The USB standard allows for devices to draw their power from their USB connection. A high power device like a printer will have its own power supply, but low power devices like mice and cameras can get their power from USB bus so you don’t need external power. Individual USB cables can run as long as 5 meters.

USB 1.1 was released in September 1998 and USB 2.0 was released in early 2000. With USB 2, the bus has a maximum data rate of 480 Mbps which is 40 times faster than USB 1.1 and has full forward and backward compatibility. USB 3.0 is now out and offers a maximum speed of 4.8 Gbit/second which is about 10 times faster than USB 2.0. USB 2.0 cables work off of four lines, a pair for in/out data transfer, one line for power, and the last for grounding. USB 3.0 adds five new lines.

Many USB devices can be put to sleep by the host computer when the computer enters a power saving mode. There is a set of drivers included in the newer versions of Windows that support certain devices called human interface devices or HIDs. These devices don’t require much data to be transferred to or from the host computer. The firmware inside these peripheral devices must support the Windows HID protocol if you want to use the existing HID drivers.

USB has been supported in Windows since Windows 98 SE. Windows 7 was be the first version of Windows to support the USB 3.0 standard.